Not Quite the Hogwarts Express, but the LA Surf Bus Is Magical Nonetheless

LA Surf Bus takes youngsters from East Los Angeles out of the inner city to the beach, a place where few have been before.

By THE ASSOCIATED PRESS

As the school bus rolled up to the beach, Veronica Lopez looked out the window past the wide-open sand at the pounding surf and whispered, “I’m scared.”

Lopez, a shy 14-year-old from inner-city Los Angeles, lives closer to the beach than most Americans, but she had been there only once, as a toddler. To overcome her fear of the water, she would need more than another day at the beach — she would need a surfboard.

Lopez is one of hundreds of city children catching waves this summer with LA Surf Bus, one of a growing number of programs in Florida,California and Hawaii dedicated to getting children off the streets and into the ocean before they have a chance to turn to gangs and drugs.“The beach is only 22 miles away from us, but it might as well be a million miles away,” said Martin Rascon, a Los Angeles Parks Department supervisor who runs an inner-city summer camp. He said that by taking the children to Huntington Beach, they learn that “it’s O.K. to get out of East L.A.”

Most children who sign up for the free eight-week surfing session do not own a swimsuit, cannot swim and have been to the beach once or twice, if at all. Most do not realize that their classroom — eight miles of beach in the self-proclaimed Surf City, U.S.A. — also plays host to one of the sport’s hottest competitions, the United States Open of Surfing.

The program, mostly conducted in waist-deep water, does not pretend to churn out lifelong surfers. It is more an effort to open children’s minds as to get them on a board.

The first challenge, however, is making peace with choppy waters.Lopez had been quiet the entire ride as dingy storefronts and graffiti-covered freeway overpasses gave way to sun-drenched beaches, gently curving bike paths and the smell of the sea. She hung back when the doors of the bus wheezed open and her classmates raced over sand and pushed one another into the crashing waves.

Once they were reassembled on the beach, they received matching periwinkle-colored neoprene shirts and were instructed in the basics of water safety: how to signal for help, how to spot a rip current, how to avoid sting rays hidden in the sand.

When it was officially time to enter the water, Lopez swallowed her fear and jumped in clinging to a foam body board. The panic on her face foreshadowed the inevitable: she was sucked under by a wave and spun around in the shallows.

She came up gasping for air, her long dark hair clinging to her face in wet strands, and retreated to the beach.

“I felt like I was getting pushed to the deep end,” she said. “I was scared of the fish, and I thought there would be stingrays.”

A fish out of water like Lopez is exactly the kind of child LA Surf Bus’s founder, Mary Setterholm, wants at the beach — and on a wave.

Setterholm, who won the women’s United States surfing title in 1972, recalled giving private surfing lessons several years ago when a 12-year-old girl drowned nearby. The girl had skipped class in south Los Angeles and went to the pristine beach with friends.

“I was teaching the private kids on the south side of the pier, and the drowning happened on the north side,” Setterholm said. “I thought: This is crazy. We’re going to the wrong population. Right there, this little girl gave me a vision, a road map.

”Setterholm incorporated LA Surf Bus as a nonprofit organization in 2003, but enrollment took off this year as word spread among county- and city-run camps that cater to low-income families.

Now, Setterholm, a 52-year-old grandmother with sun-bleached hair, takes an average of 200 youngsters a day from Los Angeles’s toughest neighborhoods to Orange County’s famous Dog Beach.She dives into the waves with them, guiding their boards through knee-deep water as the children wobble and weave and, eventually, stand on their own.

“I took a couple of tries, a couple of falls, but at the end it was worth it,” Yaritza Hernandez, 14, said. “When you go in there, all you’re thinking about is, like, air that you need and if you drown. You just try and try again.”

The trips are financed by $70,000 from the proceeds of Setterholm’s private surf school, as well as donations and grants. Still, she worries that she will not be able to keep up with demand. Setterholm recently told the camps they had to provide their own buses, each of which costs about $450 a day. That led about 40 groups to drop out.

The cutbacks were crushing for Setterholm, who sees surfing, with its exhilarating rides and humbling wipeouts, as a metaphor for these children’s lives.

She said she hoped they would remember the freedom of surfing and absorb the resilience it required long after their last wave.

“I’ve been told by therapists who’ve come with us that they never knew until that day that some of these kids could laugh,” she said. “For those us of who just take the ocean for granted and its joy, this is huge.”After five hours in the water, many of the youngsters had lost interest. But Lopez rode wave after wave with a friend, Setterholm and a seasoned teenage surfer, one of many who volunteer with the Surf Bus.

Lopez laughed as she rode the little waves on her belly. She was no longer scared, but fascinated, by the power of the water.

“At the beginning I was kind of scared, but then I got the hang of it,” she said. “I liked laying down on the board and just letting the water push me.

”On the way home, some children excitedly compared their sunburns and surfing exploits. But most were sound asleep, heads pressed against the windows, as the salt air gave way to smog and the lurching motion of the bus replaced the rhythm of the sea. 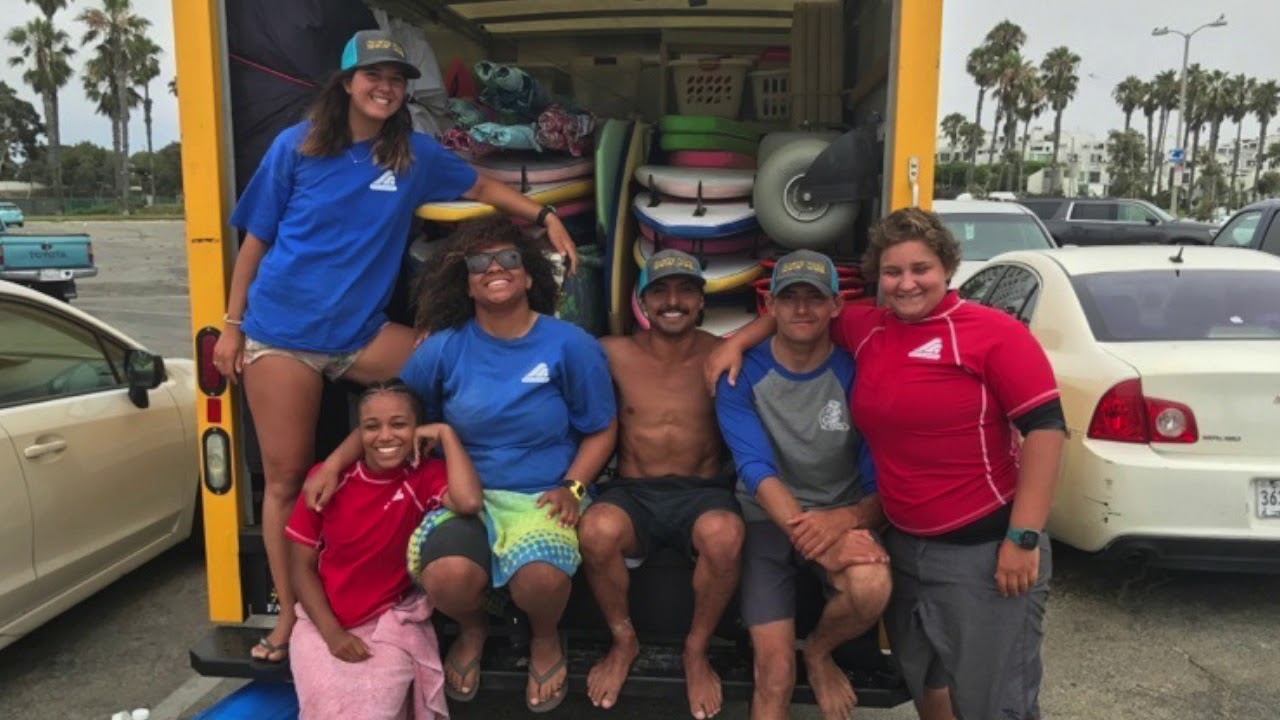